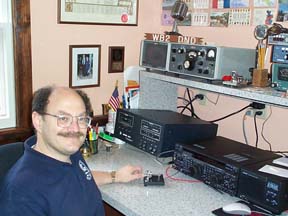 Don was first licensed in 1961. He holds the DXCC Top of the Honor Roll at 353 entities.

Don is an active contester and member of YCCC. Formerly the ham known as WB2DND, he wrote one of the first computerized logging programs (for N4NW, another Stafford DXA member).

An avid CW operator, Don has been a member of FOC since 1993.

In 2006 he was an inductee in the CQ Magazine DX Hall of Fame.